Phoebe Eichhorst - Practical Farmers of Iowa Skip to content
About 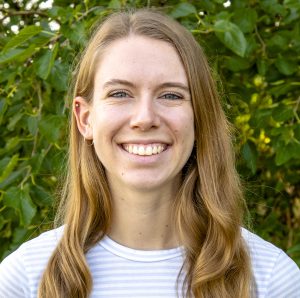 Phoebe joined Practical Farmers of Iowa in September 2019 as a member of Green Iowa AmeriCorps. She graduated from the University of North Dakota in spring 2019 with a triple degree in geography, interdisciplinary studies and honors, with undergraduate research focused on rural food accessibility in North Dakota.

Phoebe’s duties at PFI range from using geographic information systems to create maps that allow farmers to connect with one another, to supporting the communications team on video shoots and at field days. She is excited to learn from the farmers that produce the food we eat through the many events PFI hosts.

Although she spent the last four years on the “tundra” of North Dakota, Phoebe grew up on the plains of Nebraska. Her love of the outdoors and peoples’ connection to the land came from summer camping trips with her family, from the Grand Tetons to the Wisconsin shore of Lake Superior. She has always loved stepping out of her comfort zone and trying new things. While at UND, she interned as a weather team broadcast journalist, led recruitment for study abroad programs and worked as a barista.

Phoebe has always been an avid traveler and loves exploring new places. She spent five months living on the coast of Norway and has watched boats move through the Panama Canal. In her free time, you can find her at a coffee shop trying to learn new languages and planning her next international adventure – one that hopefully involves scuba diving.